Skip to content
There’s a story in the Telegraph this morning declaring that ‘politically correct’ parents who avoid telling their children folk tales are missing the chance ‘to teach children morality’.
Some parents, it is alleged, are refusing to read or tell the story of Little Red Riding Hood because it involves a child wandering off alone into the woods and straying from the path – a departure her mother has expressly forbidden. Whichever version you prefer, and there are many European variations (Das Rotkappchen from Germany, Caperucita Roja from Spain), the moral of the story is that if you don’t do as your mother/father/older and wiser relative tells you, you (and possibly your grandmother) stand a sizeable chance of coming to a sticky end! 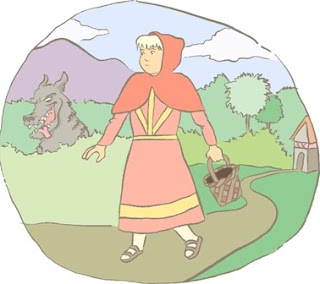 That’s not all the children of PC parents are missing! To look at the issue solely from a moral angle is to ignore the fact that ‘wonder’ tales, fairy tales or folk tales are invested with the sociality and culture of the tellers and listeners. The authors of these tales draw on an oral and literary tradition going back, in some cases, nearly two thousand years. They offer an opportunity to induct children into a genre that has its own characters, motifs, narrative frames, settings and ideological conflicts, all of which may serve as useful preparation for more elevated genres introduced to children later in their schooling.
My friend Garry informs me that a new film of (little) Red Riding Hood, starring Amanda Seyfried and Gary Oldman, is soon to be released. Looks like a hide-behind-the-sofa movie to me, Garry.