The new school year starts with me looking forward to the publication on September 6th of David Crystal’s new book on spelling. As readers of this blog well know, I am a huge fan of Crystal’s work. Crystal’s knowledge of the English language is encyclopaedic and he is one of the few writers on the subject who manage to remain intelligible to all. I suspect that Spell It Out: The Singular Story of English Spelling is a more focused and concentrated version of his previous (and excellent!) The Stories of English. 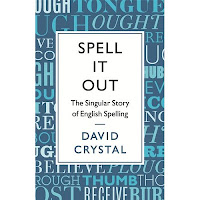 Just over a week ago, The Guardian published a brief taster, ‘The Story of English Spelling’, of what to expect. In it I was interested in several of the points he made. As he states, Old English, or Anglo Saxon English, as some prefer to call it, was ‘largely phonetic’, by which he means one letter, one sound. I must say that I don’t much like this description because, like it or not, some people get it into their heads that spellings containing more than one letter are somehow not ‘phonetic’ and that the spelling system is therefore highly irregular. This is very far from the case.
Of course, the fact that many spellings contain more than one letter is partly what makes English so difficult to learn to spell. The other thing is that there are so many spelling alternatives in English. Unlike many other European languages in which the spelling systems are very much like that of Old English, one letter spellings to one sound, English, because of its history, has multiple spellings of individual sounds. An example chosen by Crystal in the Guardian piece is the word ‘rhubarb’. The spelling ‘rubarb’ is now proliferating rapidly on the Internet, he claims, and I’m sure he’s right, though my spellchecker doesn’t like it at all. Neither do any of my dictionaries!
However, I think that Crystal’s seemingly strong preference for diversity sometimes runs away with him. By the time of the fourteenth century, English spelling was so inconsistent that, in order to make it more intelligible, it began to undergo a process of standardisation. Caxton has been credited as a major influence in this direction, though the many scriveners’ guilds also had a strong influence.
This tendency towards uniformity and standardisation reached its height at about the time of Dr Johnson’s famous dictionary and continued for some time after. Nevertheless, during the last couple of hundred years, there has been a slow but, some would argue, accelerating tendency towards variation. The newly independent states in America contributed somewhat to this process. Noah Webster (1789), the American lexicographer, deliberately and explicitly differentiated ‘American’ from ‘English’ spelling for political and economic reasons.
Since the arrival of the Internet, a powerful centrigugal force has been unleashed and the sounds in many ‘English’ words are being ‘interpreted’ in different ways, hence the ‘preference’ for ‘rubarb’ as opposed to ‘rhubarb’. While I’m sure that ‘rubarb’ is immediately recognisable and intelligible, one might ask how far such a movement in the direction of variability can go.
Of course, to some extent, these two forces, centripetal and centrifugal, are held perpetually in tension and are dependent on a huge range of cultural, economic and political factors, which is why language and language related conventions change.
Ultimately though, one factor must be maintained: the relationship between sound and spelling. Whatever the spellings we decide on (or agree to differ on?), the fact remains that it is necessary for a writing system to represent the sounds of the language. As the sounds in the language remains constant, at least in the short term, we have an anchor and thus a starting point for teaching the writing system to children in school.
My thanks to Susan Godsland for bringing the Guardian article to my attention.