Skip to content
All this talk about nonsense words! In the words of Alison Clarke of Spelfabet, they’re simply words we haven’t yet come across. Now, if you should happen to be lucky enough to visit the beautiful city of Perth in Western Australia, and you should take a walk through King’s Park very close to the King’s Park Fountain, you might even come across a few words you’ve never seen before. And how on earth would you ever be able to read them if you hadn’t learned to decode accurately at some point in your life.
Did you know, for instance, that, for the indigenous people of the south-west of Australia, the year has six seasons? You didn’t? Well, the year is divided into six nyoongar seasons: makuru, the fertility season, which runs from June to July and brings the first rains; djilba, the season of conception, from August to September and which brings the second rains; kambarang is the wildflower season, the season of birth, from October to November; while birok, their first summer and season of the young is from December to January; bunuru is the second summer, the season of adolescence and is from February to March; and, finally, djeran, or autumn, is the season of adulthood. 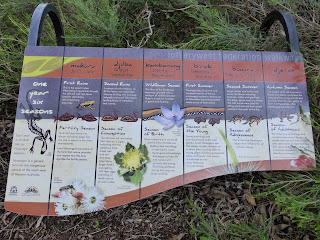 You’ve probably never seen those words before, yet I’m sure you had little trouble reading them. Now why would anyone not want for the children they teach what they have and are able to do themselves?