Skip to content
A couple of weeks ago I came across a piece by Kelli Sandman-Hurley in Edutopia entitled ‘Teaching Syllables Can Mask Meaningful Morphemes’. In the article, which you can read here, Sandman-Hurley starts by asking how many times you’ve seen the word ‘every’ spelled as ‘evry’.
This is indeed a close approximation of what we hear when we are speaking normally in conversation. On the assumption that you have seen this misspelt hundreds of times (which I have), what then, she asks, would you do to remedy the situation?
Clearly, there is often a mismatch between what we hear and what we spell/write and this is the kind of thing that is happening when writers spell ‘every’ as ‘evry’. When speaking normally we would enunciate the word as two syllables, ‘evry’, instead of three. Sandman-Hurley states that her practice was to ‘over-pronounce’ the word, a practice she now believes is ‘questionable at best and detrimental at worst’. Unfortunately, the reasoning behind the argument for why she now believes over-enunciated syllabification to be a wrong approach is seriously flawed.
She begins by stating – correctly – that ‘English is not a syllable-timed language. It is a stress-timed language’. But then she goes on to say that ‘this means that syllables bear little to no effect on our writing system’. In actual fact, the opposite is true for reasons I shall sketch out.
What ‘over-pronunciation’ or a ‘spelling voice’ does is it enables the writer to hear all the sounds in all the syllables in English words. This technique gets over two principal problems: the problem of the schwa in many words and the problem of elision. To take the last first, elision is what happens when we drop out or suppress a sound or syllable in pronunciation. Examples are ‘government’, in which almost all speakers elide the /n/, and ‘chocolate’, in which we elide the entire sound/syllable in the middle and produce ‘choclut’.
Then, there is the ubiquitous problem of the schwa, the most common vowel sound in the English language. If you define a schwa in functional terms – as ‘a sound that isn’t spelt as it sounds’ – once you’ve identified it in a word, the solution to spelling it correctly is solved by saying it precisely in a spelling voice. 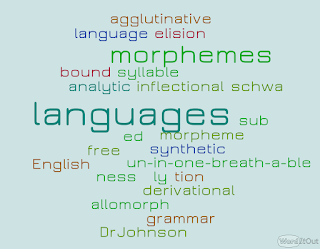 So, how we can identify the schwa sounds in words. The answer lies in the fact that schwas are the most frequently occurring vowel sounds in the English language and they are always associated with weak syllables in polysyllabic words. For example, in English, we tend to lay stress (usually) on only one syllable in any polysyllabic word. Thus, in a word like ‘chicken’ (two syllables), the stress is on the first syllable ‘chi’.
So far, so straightforward! The problem is that other syllables in a polysyllabic word may contain a syllable or syllables which are not stressed and it is these that often (though not always) contain a schwa, or weak vowel sound. So, in the word ‘chicken’, the unstressed syllable is the ‘cken’. In the syllable ‘cken’, the spelling [e] represents the sound /i/ or /uh/, depending on accent, which is a weak vowel sound or schwa.
How does this impinge on writers when they are spelling a word? The answer is that, if they’ve never seen a particular word spelled before and it contains a schwa, they may not know how to spell it, especially if the vowel spelling is one that is less frequently encountered. To compound the problem the weak vowel sound is spoken in different ways, according to accent. For example, a person from the southern states of the United States may say ‘chickun’; whereas, people from most parts of the UK will say ‘chickin’. In each case, the weak vowel sound will be said slightly differently – as an /uh/ or as an /i/.
So, how we are able to teach pupils to recognise the weak vowel sounds in polysyllabic words. The answer to that is, well, child’s play. Anyone who is a mother-tongue (L1) speaker of English will place stress on one of the syllables in polysyllabic words. Try it with these words: ‘chimney’, ‘magnet’, ‘cavalry’, ‘thermometer’. You should find that the underlined syllable in each word is the one you are stressing.
L1 speakers can also break words into syllables very easily. If you remain unconvinced, visit any nursery and watch children clap out syllables in words. It being the case that even young children can syllabify words naturally, by the time they get into Y1, we can make them explicitly aware of the strong syllable. When this is achieved, getting them to recognise the weak vowel sound in sub-dominant syllables is a piece of cake. I know because I’ve been teaching children this for years.
Unfortunately, instead of ‘misrepresenting how the written word works’, as Sandman-Hurley’s claims, by over-enunciating, we are matching exactly what is written to what we hear. You will also notice if you read her piece that Sanderman-Hurley’s understanding of what a schwa is is incorrect. She describes the second syllable in ‘trusted’ as a schwa, when, in fact, it is only the vowel [e] that is a schwa.
If pupils are properly instructed in how to segment and blend sounds in words into syllables, starting with simple words, such as ‘bedbug’ and ‘desktop’, moving on to words with a more complex structure, such as ‘groundsheet’ and ‘earthquake’. From there, it is easy to build on to ever more complex words containing three, four, five and six syllables.
Of course, teaching pupils about morphemes is useful to them – if teachers are able to explain what exactly they are and what they mean. Unfortunately, this isn’t always the case. In a recent study, Herrington and Macken-Horarik (2015) found that in a group of twelve teachers, not a single one could ‘identify the correct definition of a morpheme’.
So, going back to Sandman-Hurley’s example, how would I teach ‘every’? The division is best taught as /e/ | /v/ /e/ | /r/ /ee/. Here, the schwa is the [e] in the middle syllable. A spelling voice, enunciating the spelling of the schwa [e] as /e/ overcomes the problem. If this is followed up by asking pupils to write the word as three separate syllables and to say the sounds as they write, the practice greatly helps them to remember it.
As a teacher, one would also make absolutely clear to pupils that we are not trying to get them to speak in this way in everyday conversation, and that we would only employ these techniques when faced with a word that contains schwas or in which we elide a sound or syllable.
Ignoring syllables to focus on morphemes is putting the cart before the horse. My advice is to teach pupils to read and spell efficiently before you embark on teaching the first steps in morphology.

9 thoughts on “Teaching syllables or morphemes? Why Sandman-Hurley is mistaken”