Skip to content
Here’s another one I heard in the classroom recently. A teacher was teaching her children the sound /ow/, as in ‘cow’, and a member of the class came up to the whiteboard to write the word. After the child had written the first spelling and said the sound, the teacher told the child to write the sound /ow/, adding that it was the /o/ (as in ‘hot’) /w/ (as in ‘win’) spelling!
This is not a good idea because it is likely to be confusing to young children whose understanding of the code is still burgeoning. You cannot get /ow/ from the sounds /o/ and /w/. What the teacher should have said is, “This,” pointing to the [ ow ] spelling, “is /ow/. It’s two letters but it’s one sound. Say /ow/ as you write it.”

So how did this misunderstanding on the teacher’s part come about? Well, anyone who knows pretty much anything about Sounds-Write will know that we do not teach letter names to beginning readers. The teacher, being unsure about whether she could use letter names at this point reverted to the above and this isn’t the only example I’ve seen of teachers saying this kind of thing. The question then is: when is it a good time to start using letter names? 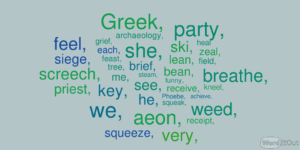 Once learners understand that spellings, comprised of one, two, three or four letters, are symbols for sounds, i.e. they know that the spelling system is a code for the sounds in speech, then letter names are an extremely useful short-cut. When a pupil asks how to spell the /ee/ sound in ‘seat’, the teacher no longer has to write the [ ea ] spelling in the pupil’s spelling book/on a whiteboard, they can simply say, “It’s the ‘ee’ ‘ay’ spelling.” Better still is, once having taught different ways of spelling, say, the sound /ee/, you could have an /ee/ poster on the wall of the classroom, which has on it the spellings of /ee/ you’ve already taught in the context of words, such as ‘deep’, ‘steam’, ‘happy’, ‘she’. And when a pupil asks how to spell the /ee/ in ‘seat’, you can point to the poster and say, “It’s the same one as in ‘steam’.” Again, it encourages children to be analytical and to think about the particular spelling in a particular word that they might not be sure about or that they simply don’t know.

This approach is one that can be used with learners/writers of any age.  Moving the level of difficulty on, suppose you are teaching the topic ‘the Egyptians’ and you are talking about archaeology. If a pupil asks you to spell it, throw it back to them by saying, “What’s the difficult bit in this word for you to spell?’ If the pupil says, “It’s the /ee/ sound,” you simply reply, “It’s the ‘ay’ ‘ee’ spelling.” That’s it! And you could even add it as another example of the different ways of spelling /ee/ to your poster on the wall.