Skip to content
If you want to know why so many Australian (and English) academics are so strongly opposed to a Phonics Screening Check, which really is a fig leaf for their hostility to phonics teaching itself, it is that, at bottom, they don’t understand the relationship between the sounds of the language and the writing system itself.
Five thousand years ago people were struggling to create a means by which nascent city states might be able to record everyday business.
For urban societies to be able to work, there have to be systems in place to enable them to function smoothly. Cities need legal, tax and business systems, which, in turn, require an accurate method of recording transactions: legal systems, for example, cannot rely on word of mouth. For a legal system to work, judgements have to be made and recorded so that they may be referred to in the future.
This is what made writing the basis for urban societies. In the words of Peter Daniels, ‘All humans speak; only humans in civilizations write*, so speech is primary, and writing is secondary: writing underpins the culture of cities’.
The reason initial attempts to record information, such as pictography, failed is that they were unable to represent the complexities of language: abstractions, the ambiguities, the intricacies of the tense system, and so on. But there was another and more elemental logic for the switch to the phoneticisation of writing: the limitations of human memory. People couldn’t remember more than a few thousand pictograms. 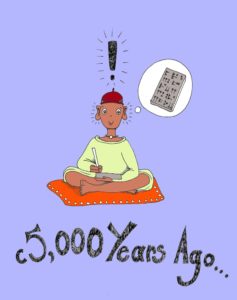 Phoneticisation liberated humanity from memory overload through the invention of the symbolic representation of sounds in language. There are forty-four or so sounds in the English language and roughly 175 symbols/spellings for representing them. The 175 or so common spellings are capable of representing any word and any new word in the language. In other words, it is extraordinarily generative. By the standards of most alphabetic languages, this is a lot to learn. The Spanish language, for instance, contains around twenty-two to twenty-four sounds and these can be represented by around thirty to thirty five spellings. For this reason, Spanish is relatively easy to learn; English, on the other hand and for reasons of its history, is more complex, less transparent, harder to learn. It makes sense then that it takes longer to teach.
What also makes sense is that because the English writing system is complex, teachers must be properly trained. Evidence that this is not happening abounds. It isn’t good enough to set up a screening check alone and hope that somehow this will ensure that phonics is taught well. It won’t be if teachers are not taught how our writing system functions and the steps required to teach it to mastery level.
So, apart from knowing which sounds are represented by which spellings, what are the levels of complexity which teachers and particularly university lecturers need to understand about the code? They are these:
I see large numbers of examples that disclose how many university teachers lack of understanding of these concepts. Take example three. The other day – as is typical in lines of questioning such as this – someone tweeted a demand to know how a child might deal with the word ‘read’, the assumption being that the recipient of the question wouldn’t know how to answer. As readers of this blog will know, the word can be read in two ways: as /r/ /ee/ /d/ to rhyme with ‘need’, or as /r/ /e/ /d/ (the simple past tense) to rhyme with ‘bed’. What could be easier! When I responded in this way – rather politely, I thought – I was blocked! This is amazing behaviour from someone allegedly interested in debating the pros and cons of the possible introduction of a phonics screening check, Australian style.
It is obvious from the sort of interventions they make that many academics have never tested their thinking by teaching a phonics lesson to young children, nor, from the level of ignorance they display, do have know how the code works or how best to teach it. Anthony Radice asks in his latest blogpost ‘Why don’t progressives want to debate?’ In the main, the answer, Anthony, is that they throw around half-baked generalisations and the moment you challenge them on the detail, they collapse like a deflated balloon.
Here’s my challenge to the ‘progressives’: set up an RCT, pitting whole language, traditional (graphemic) phonics and linguistic phonics (a la Sounds-Write) against one another. Any time, any place, anywhere! How the challenge will be denounced – but they won’t take it up!
*Daniels is not making a value judgement here. ‘Civilisation’ is meant in the archaeological sense and refers to the life and culture of cities.