Skip to content
This post is written for readers who already have some knowledge of how a good quality phonics programme, cumulatively structured, is organised and how it can be exploited to enable pupils, even at the level of Year 1/2, to read and write virtually any word in the English language.
My starting point would be to ask: What kind of expectations do you have for children halfway through Y1/beginning of Y2 in terms of reading ability? If you’ve been using decodable readers in the early stages of teaching your pupils to read, by the time you reach the latter stages of the Extended (or Advanced) Code in Sounds-Write, pretty much any of the Oxford Reading Tree series or similar are grist to your fluency mill. For example, The Bully in the ‘More Owls’ series, Stage 7, gives plenty of opportunities to practise fluency.
Here’s an excerpt from page 17:
‘R o s ie   t r i ed  t o  g r a b  th e  m a g i c  k ey,  b u t
Ch i p  th r ew  it  t o  W i l m a.
“G i ve  th e  k ey  t o  m e,  D i n o s aur  B r ai n,”
sh ou t e d  R o s ie.
Th e  m a g i c  k ey  g l ow ed  r e d  a g ai n.’
If you were reading this passage with a child, what would you anticipate to be problematical? If the child stumbled over it, you might have to point to the < g > in the word ‘magic’ and say, “This can be /g/ but in this word, it’s /j/. Say /j/ here.” That leaves us with the challenge of ‘dinosaur’ and I would offer the following help here: If the pupil said /i/ for /ie/, I’d repeat, “This can be /i/ but in this word, it’s /ie/. Say /ie/ here, and I’d then jump in and point to the < aur > and tell the child that this is a spelling of the sound /or/ and to say /or/ here.
When I’m teaching pupils whose skills, conceptual understanding of the way the code works and code knowledge are at this level, these books provide fodder for quick reads and easy practice. They also sensitise the pupil to some of the things you’ll be going on to teach formally in Y2, such as the less frequently encountered spelling of /or/.
However, many of you will probably find this kind of thing rather thin gruel because, although it is highly beneficial to be using texts on which pupils can practise fluency and ‘perform’, you also need to stretch them. An ideal way of doing this is to use a wide repertoire of informational texts.
Among others I use is a series of three encyclopedias. At the base level, I get children to practise texts from the Kingfisher Encyclopedia of Animals. Here is a text I asked a pupil, whom I was taking as an intervention and had taught up to /ow/ in the Extended Code, to read.
‘Fox’ 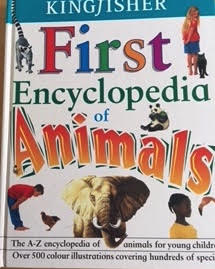 Foxes are small wild dogs with short legs and big, bushy tails. They are skilful hunters that come out at night and rest by day in burrows called dens. The female is called a vixen, the male is a dog and the young are cubs.
The red fox lives in woodland and feeds on small animals, insects and fruit. Foxes living near towns may scavenge from dustbins.’
What did the pupil have trouble with? Believe it or not, he stumbled over the word ‘vixen’. This was almost certainly because the word was new to him: not within his spoken vocabulary. At this point I can almost hear Sounds-Write-trained practitioners shouting to me to get him to split the word /v/ /i/ /k/s/, followed by /e/ /n/, ‘vix’ ‘en’, ‘vixen’, which is exactly what I did and we talked about it.
The only other word he couldn’t read easily was ‘scavenge’ and I help with this by splitting it and pointing out that the < ge > is /j/ and that it is ‘two letters but one sound’. Again, we discussed the meaning of the word in the context of foxes living in cities.
After reading another short paragraph, I asked the pupil to write the word ‘vixen’ and the word ‘scavenge’ in the S-W time-honoured way. The whole thing took no more than ten minutes of the lesson and ended with the pupil feeling as pleased as punch with himself.
Texts, such as this, do wonders for boosting confidence. They are bite-sized in length and the pupils can see that they don’t have pages of text seemingly without end to read. The words contain sound-spelliong correspondences that the pupil has covered, or that are easily predictable. For example, you may be wondering how the pupil managed to read such words as ‘female’ and ‘fruit’ when he hadn’t yet covered the [ ui ] for /oo/ or the [ e ], which, for him, in ‘female’ could be /e/ or /ee/. Given the context, the words proved to be easy. And, if there’s time, you can always talk about them in the context of sounds and spellings and keep them in mind for future lessons.
By contrast, the Dorling Kindersley Encyclopedia of Animals is a step up from the Kingfisher in that the vocabulary is richer, there is more extensive use of modification, contrastive clauses abound, and so on. In a nutshell, information is more dense, though not so much that the step from, say, a Kingfisher type of encyclopedia is too great.
Whereas there is a single page on the subject of the fox in the Kingfisher, in the DK two pages devoted to ‘foxes’. Nevertheless, the information is still organised into bite-sized chunks, which are not likely to be terror-inducing. The following is the opening paragraph.
‘Foxes 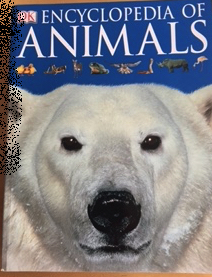 Foxes belong to the same family of meat-eaters as dogs and wolves. They can easily be told apart from their relatives by their narrow, pointed faces, large ears and bushy tails. The 21 kinds of fox are found in all types of habitat, ranging from hot deserts or forests to the cold of the Arctic. One kind, the red fox, even lives in cities, feeding at night on the household rubbish left by humans. When searching for food, foxes can travel for long distances without tiring. They are foragers, eating anything that they come across, including fruit, insects and small animals. Some foxes live in small family groups, but most of them hunt for food on their own.’
In the passage above, there is hardly anything that is likely to cause very much trouble to a child who has covered the Extended Code as far as spellings of the sound /ie/. I’d have my eye on ‘searching’ to run my pointer stick under the [ ear ] spelling; and ‘foragers’ might need me to put in some syllable lines – /f/ /o/ | /r/ /ae/ | /j/ /schwa/ /s/ and give us something to talk about in terms of using a spelling voice when writing the word. It goes without saying that we’d also talk about meaning.
As the teacher of a whole class, a small group or a single pupil, reading a text like this one, I would pre-read it to make absolutely certain I’d spotted potential difficulties and I’d be ready with a whiteboard to pre-teach or post-teach anything likely to cause difficulty. I’d also try to intervene minimally while the text is being read and simply use my expertise to keep things moving and thus enable comprehension.
finally, at the next level of textual complexity is the Dorling Kindersley book Animal. As the blurb is keen to point out, there are over 2,000 species of animal profiled. In the book, animals are classified according to the Linnaean system, the rationale for which is explained clearly at the beginning.
This book’s treatment of foxes is, as you would guess, more detailed in every way: ten or so foxes are described and little maps appear to show from which part of the world each species of fox comes. Taking our old friend the red fox as an exemplar, the following is an extract:
‘Vulpes vulpes 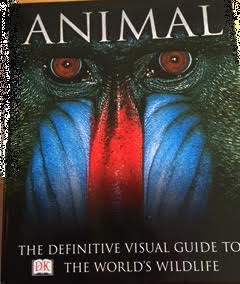 Red Fox
Active by day and night, the red fox is exceptionally widespread and adaptable both in habitat, from Arctic tundra to city centre, and in diet. Home is earth (den) in a sheltered place – for example, an enlarged rabbit burrow, a crevice among rocks, or roots, or a space under an outbuilding. The basic social unit is a female (vixen) and male (dog), who mark their territory of 1-10 square km (0.4-4 square miles) with urine, droppings, and scent from anal and other glands. Single-male-multi-female groups also occur but only senior females breed. Mating is in late winter or early spring when females make eerie shrieks. Gestation is 49-55 days and litter size up to 12; averages vary from 4-5 in Europe to 6-8 in North America. Both parents and “helper” non-breeding females care for the cubs and feed them after weaning at 6-12 weeks.’
Quite apart from its value as an informational text, the passage can be exploited in all sorts of ways. Conducting a ‘Seek the Sound’ exercise, looking for spellings of /s/ is a useful follow-up to Unit 16: I found [ c ] x 3, [ s ] x multiple, [ ce ] x 3, [ sc ] x 1. The sound /j/ spelled [ g ] (‘enlarged’ and ‘gestation’) occurs frequently in texts such as this, whilst there are also wonderful opportunities for practising reading and spelling polysyllabic words: my favourite would be ‘exceptionally’. These texts, in part or as a whole, are also perfect for using as dictation. Of course, there is, in addition, a range of poems and stories about foxes that can be deployed to support the above texts.
The more fluent the pupil, the more can cognitive attention be focused on meaning, and with reasonably short texts such as this, if there have been hold-ups caused by decoding errors, the text can easily be re-read for unimpaired comprehension. However, a teacher who knows their stuff can assess very accurately how difficult a text is likely to be and will be able to select texts calibrated accurately to the level of the pupil and positioned just a step in front of where the pupil is currently.
I hope this post encourages those not presently using these kinds of texts to take the opportunity to enrich their children’s knowledge and understanding of the code and to practise and enhance their skills, while, at the same time, deepening their knowledge about the world.