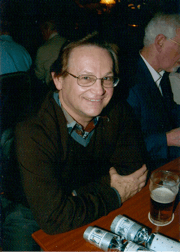 David and I first met almost twenty years ago, by which time, he’d been working as an educational psychologist for Wigan Council for more than twenty years.

What brought us together was our mutual commitment to teaching children to read. During his career, David realised that the problem behind many of the things that were going wrong for the children he was being called in to see in schools stemmed from their inability to read and write.

As we got to know each other better, he later showed me a programme he’d written to teach children to read. With his customary attention to detail and very much to my amazement, David had made floppy discs full of lessons plans and theories about how to teach literacy. The only thing was that the programme he was devising didn’t work any better than traditional phonics approaches.

What had been missing was that he hadn’t quite figured out what the magical but still missing ingredient was that was needed to solve the problem: the idea of teaching the code from sound to print.

For both of us, the epiphany was in reading a then little-known academic called Diane McGuinness, from the USA, who had written a book called Why Children Can’t Read and What We Can Do About It. It brought home to us the realisation that, until that time, we – and just about everybody else – had been trying to teach our very complex writing system back to front, from print to sound.

Of course, once anyone arrives at the understanding that there are a finite number of sounds in the language and that they stand as the anchor for teaching of the code, the rest begins to fall into place.

This discovery animated David for the next dozen or so years and he threw himself into our Sounds-Write project with gusto. If you take a look at the Sounds-Write website, you can see David’s handiwork in the ‘Report to schools‘, collected from over twenty schools from three areas of England and which involved well over one thousand six hundred children altogether.

As a very able mathematician, David collected and crunched the numbers on the results from the data on spelling obtained on children taught the ‘Sounds-Write way’. With his attention to detail and with his psychologist’s hat on, he then produced his meticulously reported study. What also shone through was David’s determination to be scrupulously honest in the collection of the data. Whether a school reported poorer results than we had expected, and some did, or not, it all went into the mix. Notwithstanding, in the study focusing on the 1,607 children to be taught Sounds-Write throughout Key Stage 1, an amazing 91% were found to be within or above the normal range for their ages. I hope if you haven’t ever had the opportunity to read it, you’ll take the opportunity now.

Most Sounds-Write trainees will be familiar with his famous word lists, which include words, such as ‘broncobuster’ (an old-time tamer of mustangs) and ‘bigmouth’, words you certainly wouldn’t find in the ultra-cautious lists prepared for teachers today. David was also the one who was mostly responsible for sorting out the sound-spelling and spelling-sound lists in our Lexicon, an enormous and much appreciated endeavour.

David tasked himself with touring the Wigan primary schools and, to my huge amusement, rather like the late Christopher Hitchens, author of God is Not Great, who took his book into the Bible-belt of the USA to debate Bible-thumping pastors, David would go into schools and explain to bemused teachers that virtually everything they had been taught and almost everything they had been doing previously was wrong. It was a brave and potentially dangerous thing to do but, undaunted and trusting in the logic and conviction of his argument, in he went. It was a rough ride but, in many of these schools, David managed to get a hearing and actually managed to attract a whole raft of teachers and teaching assistants to our trainings.

Whenever his job would allow, David would sit in on those trainings, which, I have to say, were rambunctious in the extreme. Wigan women are feisty and particularly well-versed in the art of banter, and some of the exchanges were more like a comedy show at times than ‘serious’ professional development. A memory I’ll always have is of David joining in with all of this, sometimes with tears of laughter streaming down his face.

Such was his enthusiasm, I would, at times, literally, have to prise him away from some poor, unsuspecting teacher he had lighted on as she tried to head off for something to eat – so enthusiastic was he to get across his message about some arcane aspect of Piaget’s theory.

But for all that, the thing I most admired David for was his unrelenting commitment to the good of children. Whether a child suffered with a stammer, was an elective mute, a bed-wetter, or, was being mistreated in the home, David was absolutely steadfast in his resolve to make that child’s life a bit better. And this was often in the teeth of opposition from both head teachers and, occasionally, parents, and I might add, the unrelenting bureaucracy he was faced with and which he thoroughly detested.

Eventually, David retired from the psychology service and, with time, also from working for Sounds-Write. One thing he didn’t retire from was maintaining a lively interest in the world of science and politics. I’m sure we shall all miss him greatly.

One thought on “In memory of Dave Philpot, co-founder of Sounds-Write”