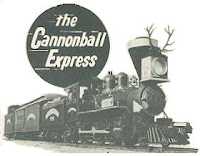 You can tell we’re still becalmed in the silly season when the Indie reports a poll taken in New Zealand ranking ‘naughty’ kids by name!
Top of the list was Callum for boys and Chelsea for girls! Not very encouraging for the Clintons then! With not a naughty Nick in sight, Chardonnay came in at number three – you’d have to be under the influence, wouldn’t you? Casey came in at number five on the girls’ list. When I was a kid, Casey was the name of the very masculine driver/engineer of the Cannonball Express in a US TV series. You don’t believe me? Take a listen to Johnny Cash. Johnny? Now there’s a good name for a boy, unless you’d rather Sue? Anything but Brooklyn!
Thanks to TV Acres.com for the picture of the Cannonball Express.