Skip to content
If you live in England and teach literacy, you’ll have heard of 100 high-frequency words! You may also remember Neil MacGregor’s recent and marvellous ‘History of the World in 100 Objects’ series. Well, now David Crystal has turned his attention once more to the subject of language and produced the Story of English in 100 Words.
The words he has chosen are meant to ‘tell a story’, be redolent of their time and the culture they represented. The first is the oldest known word carved in the runic script, known as the futhorc, after the first six letters of its alphabet, on a roe-deer’s ankle bone and found in a cemetery site in Norfolk. The word appears to be, raïhan or roe-deer. 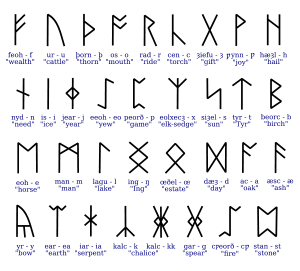 From thence, the list, which as you might expect is chronological, includes words from Anglo-Saxon, though probably not as many as you’d think, Early English, Middle English, right through to Modern English.
They embrace not only the words we write but colloquial words like ‘doobry’ and ‘dilly-dally’. Then there are dialect words, such as ‘brock’. [My own favourite is the north Staffordshire word ‘sneeped’], grammatical words, and ‘rude’ words, of which there are three, introduced ‘blushingly’ by their initials alone!
As the English language is a veritable ‘vacuum cleaner, eagerly sucking in words from other languages whenever English speakers find it useful to do so’, you’ll also find ‘dinkum’ and ‘schmooze’. Of course, no such list would be complete without a word from Harry Potter – ‘muggle’ –, or one spawned from the new technologies – ‘Twittersphere’ – which is where he leaves us, for now!