Skip to content
Did you listen to Michael Rosen’s Radio 4 programme ‘Word of Mouth’ on Tuesday afternoon? This one in the series was about the alphabet and, as is usual in these programmes, Michael had invited two academics – Dr Laura Wright and Professor Nils Langer – to talk about the subject.
Langer got the ball rolling by making clear from the outset that while speech is something we learn naturally, writing is an invention, from which it follows that it must be taught. ‘Language,’ he said, ‘is humanity’s greatest natural gift and writing is humanity’s greatest artificial innovation.’ – a point we make on all of the Sounds-Write trainings we do in phonics!
Langer cites the example ‘dog’. As the Latinate name (canis) suggests, the English word ‘dog’ is entirely arbitrary. In Italian, the word is ‘cane’; in French, it is ‘chien’; in German, it is ‘hund’; in Catalan, it is ‘gos’; in Greek, it is σκύλος, pronounced /s/ /k/ /ee/ /l/ /o/ /s/, or ‘skeelos’. Similarly, the sounds /d/ /o/ and /g/ for the English word ‘dog’ are the conventional but arbitrary symbols we use to represent the sounds in the word. As Langer says, ‘Letters are symbols that represent sounds’. Which, as an aside, does make me wonder why it is that Michael Rosen, while seemingly being able to sign up to this idea, at the same time doesn’t ‘get’ phonics teaching. 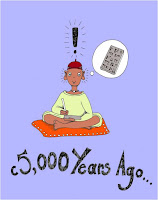 The great revolution in the development of writing systems was the phoneticisation of graphic representation, which happened about five thousand years ago with the Sumerians. However, to make such a system work, someone has to set about working out what the sounds of a language are and, for accuracy, you need a graphic symbol inventory to represent the sounds of that language. 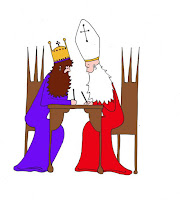 This conceptualisation of the earliest writing system represented a quantum leap and the idea spread rapidly and was adopted by other Mesopotamian polities. From the Akkadians (c. 2400 BCE), who had adopted the Sumerian script, writing was adapted to represent western Semitic languages. Through Canaanite and its variants, the direction of the script stabilised from right to left and was reduced to 22 letters and it was this that was used by the Phoenicians. The Phoenicians, famous for trading right across the Mediterranean brought the idea to the Greeks, who adopted the system and added representations of the vowel sounds. Eventually, the alphabetic script was brought to Britain in the 7th century. by an Irish monk Aidan with the help of King Oswald of Northumbria.
Over time, as the programme reveals, additional letters were added for sounds in Old English not represented by the Latin language and script. There are a number of delightful anecdotes recounted by Langer and Wright. For example, I didn’t know that the sound /w/ disappeared from the German language at about 1,000 years ago. As many readers will know, the letter W in German represents the sound /v/ not /w/, as it does in English. And, for those who don’t know why the ‘Ye’ in ‘Ye Olde Tea Shoppe’ might have been so written, why we add Xs as kisses at the end of letters, and why we still spell Romance words, such as ‘honest’, ‘honour’ and ‘hour’ with a letter h, even though it is not pronounced these days, Dr Wright is keen to reveal all.
What the programme doesn’t tell the listener is that nearly five thousand years ago, the Sumerians not only invented this kind of writing system, they also knew how to teach it. Rule number one was that teachers needed to master the complete structure of the system before they taught it. Only then could they teach the specific sound units that were the basis for their code. After that, they were able to teach the arbitrary, abstract symbols that represent the sounds, i.e. the code.
If we taught children in English-speaking schools that the writing system is a code for the sounds in our speech and that it is reversible, taught from simple to more complex, and ensured that decoding (reading) and encoding (writing) are tied together at every level of instruction through looking (visual memory), listening (auditory memory), and writing (kinaesthetic memory), we would be producing a nation of literate children.