Skip to content
Many years ago, I developed a taste for the novels of Graham Greene and, although I didn’t find his tale The Quiet American (1955) as enthralling as some of his others, nevertheless, a phrase from the book has always reverberated in my  mind. It’s a complex meditation on the changing order of power relations in, particularly Indo-China, as it was then. Greene, in the context of growing American involvement in Vietnam (post Dien Bien Phu), writes that “Innocence is like a dumb leper who has lost his bell, wandering the world, meaning no harm”, the implication being that innocence is, in fact, capable of doing great harm. The ‘innocent’ in this labyrinthine web of foreign intrigue is Pyle, an American agent, who is emblematic of what Greene considers to be the naiveté of the new kid on the international block, the United States, whose intervention in the Far East causes, so the book alleges, untold harm and suffering to the Vietnamese.
When Greene wrote the book, the fear of contracting leprosy was terrifying – it wasn’t until the 1940s that a cure was finally developed – and the prospect of being consigned to a leper colony was an ever present horror for those living and working in many regions of Africa, India and South America.
Similarly, this kind of dangerous innocence reminds me of defenders of whole language and its many manifestations, the main one of which is mixed methods. They infect the gullible and unwary with the bacterium illiteracy. As with leprosy, the victims suffering from the contamination are often unaware of the symptoms, which can remain latent for many years. Unlike the case of leprosy, there has always been a cure for the disease of illiteracy. It was developed by the Sumerians around five thousand years ago. Sadly, like the quacks down the ages offering curatives for leprosy, innocence in the guise of quick and easy answers –  “Look at the first letter and guess”, or “What do think it says from the picture?” or “What do you think it might be from its position in the sentence?” –  to the difficulties posed by the English alphabetic code has damaged the teaching of universal literacy by promoting methods that promise everything while delivering nothing.
In 2006, I was working with a school that was collecting for CAFOD, an organisation that offers aid to underdeveloped countries. In this particular year, the school was collecting money for the victims of leprosy, a chronic infection caused by Mycobacterium leprae and Mycobacterium lepromatosis. 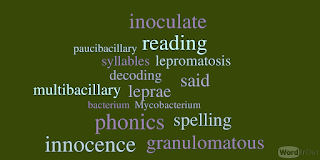 As I was teaching a Year 2 class how to read and spell polysyllabic words, I thought it would be helpful to make use of the fact that they were collecting for sufferers from leprosy and integrate it into our phonics lesson. Only a matter of weeks before, I’d happened to read an article in the New Scientist on this very subject. The article explained that there were two main types of the disease: paucibacillary and multibacillary leprosy.
After giving a short talk about the disease and how it had taken until the 1940s to find a cure, I wrote the words ‘multibacillary’ and ‘paucibacillary’ on the board. We talked about what the words meant. As readers will readily work out, ‘bacillus’, is the Latinate word for pathogen or germ, ‘multi’ means many, while ‘pauci-‘ comes from the Latin ‘paucus’, meaning ‘a few’ or ‘lack of’ and from which we get the word ‘paucity’. Armed with this knowledge, the children quickly suggested that ‘paucibacillary’ leprosy might be easier to cure than ‘multibacillary’ leprosy. They were right!
Having established meaning, we now turned our attention to the structure and spelling of the words. In the case of ‘paucibacillary’, I asked them what syllables they could hear. They agreed to divide it as follows pau | ci | ba | ci | lla | ry. Next, we looked at the individual sound-spelling correspondences within each syllable. Thus, /p/ /or/ | /s/ /i/ | /b/ /a/ | /s/ /i/ | /l/ /a/ | /r/ /ee/. And then we talked about what might or might not be difficult to spell were we to need to write the word.
Most of the children thought that the spelling au for /or/ would be the one they’d have to think about and we analogised it by linking it to other words with the same sound-spelling correspondence. They suggested ‘August’, ‘autumn’, and ‘Paul’. One or two other children felt that the spelling of the sound /s/ might need to be noted, though, after already having been taught explicitly the various ways of spelling /s/, most thought it wouldn’t be a problem.
After saying the word precisely by saying it aloud in its syllables, we all wrote it, saying the sounds in each syllable as we wrote them, leaving gaps between the syllables. Then we repeated the process by writing the word as it would normally be written, i.e. without gaps.
Two weeks later, in the context of the fundraising, we asked the same class of children to write the words again. Three quarters of the children spelt the words correctly and the quarter that didn’t spell them correctly spelt them with plausible (in other words ‘readable’) spellings, spelling the /or/ as or and /s/ as s.
Phonics, as my friend Debbie Hepplewhite has often said, is not something for teaching children in the early years alone. It is an approach that enables people of all ages to read and, potentially, to spell any word in the English language. If children as young as seven can read and spell words like ‘paucibacillary’, they can learn to read and spell anything however seemingly complex. And yet we still have supposedly intelligent adults telling us that words like ‘have’, ‘said’ and ‘was’ cannot be decoded.
The only constant in the writing system is the sounds of the language. It is the sounds that drive the code; the spellings are the symbolic representations of those sounds. This is why whether a person is four or eighty-four, phonics provides well substantiated answers to the problems of reading and spelling in the first instance.
As with Pyle, of whom Fowler, the story’s ‘protagonist’ says, “I never knew a man who had better motives for all the trouble he caused”, so it is with the mixed methods and whole language ‘innocents’ who peddle their self deceptions in an ostensibly noble cause.
The point is that, without having been inoculated from the life-long blight of illiteracy with a daily dose of linguistic phonics, the children referred to above wouldn’t have been able to read and spell not only the words associated with the blight of leprosy but also with all and any words.