Skip to content
How can I tell that we’re back in autumn, which seems to be not so much a season of mellow fruitfulness as a season of a dearth of academic ‘astutefulness’? Well, because Misty Adoniou, a senior lecturer at the University of Canberra, has been at it again! What is the ‘it’ that she’s been ‘at’? Answer: operating way beyond her area of expertise in the matter of understanding how writing systems in general and the English language in particular work.
In her most recently published Op-ed ‘Seven things to consider before you buy into phonics programs’, in The Conversation, Misty once again reveals her appalling lack of knowledge when she claims that English is not a phonetic language.
I don’t propose to re-rehearse all the arguments I made previously (here) on this subject when Misty, in an article in the same publication – you’d think the editor would know better by now! – , wrote a similarly misinformed piece about spelling.
This time I thought, who better to lay to rest Misty’s claims once and for all? Peter T. Daniels and William Bright are two of the foremost experts on the world’s writing systems. It may seem a little odd to lay people when the subject of teaching children to read and write pops up, but writing systems are human inventions designed to represent the sounds in our speech.
As I’m privileging the work of the two aforementioned academics, I thought it might be wise to quote from their seminal book The World’s Writing Systems (1996) directly. 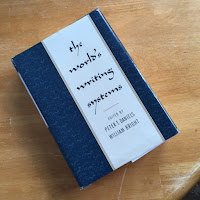 Completely in accord with the work of leading cognitive psychologists, such as David Geary, John Sweller and Steven Pinker, Daniels writes:
‘Writing differs from language, though, in a very fundamental way. Language is a natural product of the human mind – the properties of people that make it possible for everyone to learn any language, provide they start at a young enough age – while writing is a deliberate product of the human intellect: no infant illiterate absorbs its script along with its language; writing must be studied.’
This statement in itself does not offer a rebuttal of Adoniou’s argument that English is not a phonetic language. However, Daniel’s in his essay ‘The Study of Writing Systems’, goes on to make clear what we’re talking about. He writes:
‘… writing is defined as a system of more or less permanent marks used to represent an utterance in such a way that it can be recovered more or less exactly without the intervention of the utterer… It is necessary for a writing system to represent the sounds of a language.’ (Daniels’s emphasis)
In getting on for 900 pages of analysis and investigation of the many and varied writing systems in the world, through the work of an impressive range of scholarly experts on the subject, what emerges is irrefutable: writing systems are based on the sounds in speech. Though they may be complex, as is the case of modern English, in comparison with rather more transparent scripts, such as Spanish or Italian, all writing systems can be taught, and the best way to teach them is through properly developed phonics programmes in which the complexities have been worked out and understood.
What is so especially irritating about Misty Adoniou is that she is mystifying for people who have little or no understanding of how the English language works in relation to the writing system this the most important aspect of children’s education: the process of how we should be teaching children to read and spell English.