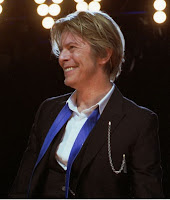 One particular news item reporting on the death of David Bowie harked back to an interview he did with Jeremy Paxman on BBC2’s Newsnight programme, which you can see here.
As probably everyone knows by now, Bowie changed his name from David Jones  early on his career but what was fascinating about his meeting with ‘Paxo’ was his admission that he wasn’t sure any more how the name should be pronounced.
Phonics aficionados are well aware that the spelling < ow > can be /oe/ as in ‘grow’ and it can also be /ow/ as in ‘cow’, which reminds me of the confusion people have/had over how to pronounce J.K. Rowling’s name. She prefers the /oe/ version, I believe.
It seems somewhat ironic that a spelling in his assumed stage name should anticipate the life of a performer whose roles could be read in so many ways.

In the interview, Bowie also acknowledged the Scottish version ‘Booie’, although he claimed that the provenance of the name derives from Davy Crockett’s old mate, the eponymous Jim Bowie, who died at The Alamo and popularised the famous ‘Bowie knife’.

Of course, this brings us back to the idea that many spellings in English can represent more than one sound. By and large, as fluent readers, we don’t have a problem with this feature of the writing system unless we come across the name of a person (Here’s a nice example) or a place name or even a less frequently encountered word we’ve never come across before. In cases like this, we simply ask someone who is already in the know or we consult a pronouncing dictionary.