Skip to content
I’ve just been looking at Cumbria County Council’s ‘Reading Intervention Resources’ and, frankly, I’m stunned. You would think that the Rose Review (2006), not to mention all the research that’s been done over the past thirty years, has passed by Cumbria County Council’s reading intervention team without them even noticing.
I remember Roland Barthes*, the French structuralist, once making the point that if you want to convince someone of the realism (believability) of a text, you need to make it as dense with detail as possible by packing it with factual information. This has the effect of masking the constructed nature of the text, its artificiality, if you like. In publishing the list of books they are recommending to, presumably, teachers and parents/carers, Cumbria have supplied precisely the density of detail I am talking about: the titles of hundreds of books. The very length of the catalogue masks the fact that the books you’ll find listed there are not graded for decodable difficulty but simply for the sheer amount of text on each page.
You might think this is a good thing and it certainly is if you know how and when to use such books but, and here’s the thing, you will have to look long and hard to find a reader that supports children learning to read in the early stages of their literacy tuition.
A good many of the books on the list include examples from the Oxford University Press’s Oxford Reading Tree series and these are entirely representative of many of the other educational publishers’ books. This is how they work:
The truth is that these books differ hardly at all from the Janet and John, Dick and Dora, Peter and Jane books of what now seems a bygone era.

By contrast, how do decodable readers work?
To exemplify the points I am making, here is a sentence from the Oxford Reading Tree book ‘What a Bad Dog!, a Stage 2 book that would normally be given to a child in YR or Foundation Stage 2 (aged 4-5): ‘Floppy pulled the washing down.’ In order to read the sentence, this is what the child would have to know – 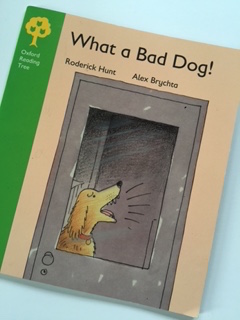 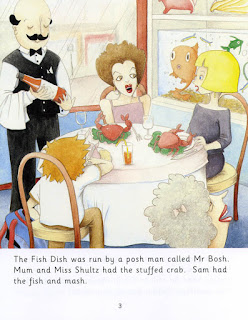 Decodable readers build on the complexity of text in a way that is commensurate with what the child is being taught formally and this gives the child a chance to practise the skills of segmenting and blending and to recycle the code knowledge already covered before they go on to learn new and more complex elements of the code.
I can’t see very many books in the Cumbrian list that are likely to have the kind of orientation I am talking about and that will promote fluency and confidence. Indeed, you only have to look at the titles of most of the books to be able to see this.
Does this mean that the books on the list don’t have a place in teaching children to read? Not at all! In fact, as soon as children have been taught a good bit of the code, these books will serve to provide opportunities for promoting fluency and for recycling the code knowledge they have, at an earlier stage in their literacy tuition, been taught.
So, it’s not the list per se that I object to: it’s the undiscriminating way in which it has been presented and the lack of knowledge and understanding on the part of those who published it. The trouble is that, without proper training, teachers (and compilers of lists such as the Cumbrian model) often fail to appreciate how important decodable readers are in the beginning stages of children’s learning to read and spell.

*Lukács also made a similar point in his The Historical Novel.