A question I’m often asked in regard to correcting spelling in pupils’ work usually runs along the lines of: My child is in Y3 and the teacher hasn’t corrected such and such a spelling mistake. Is the teacher right and, if not, what should the teacher be correcting?

Well, as the writing system in English is complex, the answer, too, is complex. For example, in the first year of schooling, if a child has been taught all the one-to-ones and the double consonants [ ff ], [ ll ], [ ss ] and [ zz ] and the child spells the word ‘buzz’ as ‘buz’, I would correct it. What differs in the way we, at Sounds-Write, correct errors from what many teachers and parents do, however, is crucial. First, we wouldn’t underline the whole word. After all, the child knows how to spell the /b/ and the /u/. What the child is still grappling with is that we can spell the sound /z/ with the spelling [ z ], but at the end of short, single-syllable words, we spell it like this [ zz ]. And we would add that the spelling is two letters but that it’s one sound.

As the teaching moves into the more complex area in which a sound can be spelled in multiple ways, error correction should be dependent on whether the sound-spelling correspondences have been covered or not. For example, in Y1, if a child has been taught four spellings of the sound /ee/ ( [ee ], [ y ], [ ea ] and [ e ]), it is reasonable to correct the word ‘steam’, which the child spells as ‘steem’. We would do that by pointing to the [ ee ] and saying, “This is a way of spelling the sound /ee/ but in this word we need this [ ea ] spelling of /ee/.” And the child would then be asked to correct the error. 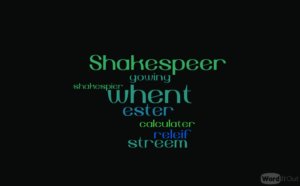 Moving on to Key Stage 2 and into the area of Y4 or 5, here is a list I saw on Twitter: ‘Yr 5. E.g. gowing, whent, releif, caculater, ester, shakspier etc.’ The writer of the tweet made clear that all of the errors had been made in the context of writing in a ‘home journal, dictation and copying’.

The first thing to say is that, had these errors occurred in one piece of writing, I wouldn’t have corrected them all at the same time! As they didn’t, let’s look at what might have helped the pupil when spelling these words in the future. As a general rule of thumb, take the place where the error has been made and discuss it. Thus, you can spell /oe/ as [ ow ] in ‘grow’ but in ‘going’, it is spelt [ o ] and I’d take the discussion further by looking at the free morpheme ‘go’, examining the spelling of the sound /oe/ in that word and talking about how it doesn’t change when we add the bound morpheme ‘-ing’ to it. I’d do something similar with ‘whent’, by pointing to the [ wh ] spelling and saying that, “In this word, we spell /w/ like this [ w ]”. With ‘relief’ I might also draw on analogies, such as ‘brief’, ‘grief’, ‘retrieve’, ‘belief’, and so on.

The problem with this approach is that it is very unsystematic, which leaves the parent/carer/teacher constantly ‘fire-fighting’ as the errors crop up. Much better is to get down to the business of teaching the code systematically according to sound. In teaching from sound to print, the human brain begins to spot and record the common patterns of the spellings of a sound in words and, with careful teaching, the pupil is trained to look carefully at and to notice the particular spellings for sounds in words.

How to correct errors simply and without confusing the learner is a specialised job and requires teachers to be trained in how the code works – from sound to print –, the knowledge of the code – which spellings represent the sounds in English – and the skills involved in manipulating the sound-spelling correspondences.

Thanks to Pexels for the image.

4 thoughts on “How to correct common spelling errors”