Skip to content
This post follows on from my last, where I implied that teaching is an extraordinarily specialised job and requires that teachers who teach literacy are very well trained. In this post, I am making the point that, where teachers are well-trained, they produce results that knock your socks off!

Way back in December 2010, I published a post that included the Key Stage 1 spelling results for the school in which we piloted Sounds-Write. The two-form cohort was taught Sounds-Write for the first three years of their schooling, at the end of which we tested the pupils using Dennis Young’s Parallel Spelling Test, which, as the name suggests, has a number of parallel forms. I like the Young’s test because it tests (pretty much) from simple to more complex in a fairly coherent way from the point of view of phonics: CVC, CVCC, CCVC, CCVCC, double consonants, etc. 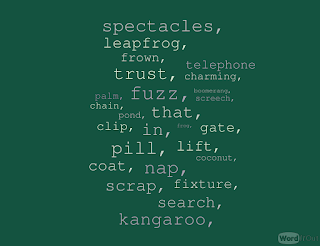 I’m publishing it again because it shows how, when Sounds-Write is taught with fidelity, i.e. teaching everything we say needs to be included for half an hour a day, every day, over three years, the results are eye-wateringly good. You can also see that the SATs results achieved by every one of the fifty children corresponded fairly closely with what they scored on the test.

We used a spelling test for the reason that Sounds-Write has always argued that, because it depends so much on recall memory rather than recognition memory, spelling is more difficult than reading and much more likely to give an accurate indication of a pupil’s literacy than a reading test.
Somewhat fortuitously for the purposes of enabling people to see how transparent the results are, Key Stage 1 ended with fifty children having begun at the start of YR and finished at the end of Y2. Of course, more children began in YR and some children joined the school during the three years; some children also left the school. However, we only took data on the children who had received Sounds-Write teaching throughout the whole three years and that happened to be 50 pupils.
As you can see from the table below, the results were remarkable! At the age (on average) of 7 years and 4 months, 21 (44%) of pupils had a spelling age of 11 years. Because, even we didn’t expect the results to be quite as good as this, we hadn’t prepared to use the test up to a spelling age of 16, but many of the 44% would undoubtedly have scored higher than the 11 years at which we stopped the test. 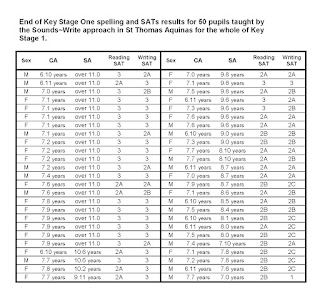 A further eleven (22%) pupils had a spelling age of between 9.6 and 10.6, which takes us to a total of 66% of pupils scoring well over two years ahead of chronological age and reaching a level of literacy that would probably just about enable them, in sheer encoding and decoding ability, to cope with the start of a secondary curriculum.
Thirteen (26%) pupils scored between 8.0 and 9.0 and another four (8%) pupils scored between 7.6 and 7.10, all of them scoring at six or more months ahead of chronological age. Only one pupil out of the fifty scored below chronological age.
Once again, reminding you that the average age of the children in these two classes was 7 years and 4 months, the figures show that a whopping 98% of pupils were scoring well above chronological age and many of these were hitting spelling ages that many teachers would only dream about.
If reading and spelling were taught together, starting from an Initial Code based on one sound-one spelling correspondences before moving on to teach that sounds can be spelled with more than one letter, that there is more than one way to spell a sound, and that many spellings represent more than one sound, as these children were, and if the teachers were trained to understand the relationship between the sounds of the language and the writing system, and if literacy were led by a very determined head, then results like these would be commonplace.