Skip to content
For years we have been handed excuses by schools for failing to teach their children basic literacy: ‘We’ve got lots of boys in the class’. ‘Many of the children have summer birthdays’. ‘A majority of our children are from very poor backgrounds’. ‘Lots of our children don’t speak English as a first language’. Time and again the excuses have been trotted out until they have become clichés, as if by their very invocation the school/class teacher are absolved of the responsibility for ensuring that all their children become literate.
Now, the teachers at St George’s Church of England Primary School have shown conclusively just how wrong are the claims made by the jeremiahs and by those who have never understood how the sounds of the English language relate to the writing system!
Ten years ago this year Sounds-Write published evidence of what could be achieved over the first three years of schooling in a school (St Thomas Aquinas) that by no means lies in some affluent, leafy suburb. Today, we are presenting you with further confirmation that high quality phonics teaching works. What’s more it works for all children, with the possible exception of a tiny percentage of children with speech and language difficulties.
St George’s is a school in one of the very most deprived areas of London, where well over half the children are entitled to free school meals, and where the language spoken at home by many children is not English. The evidence provided by the school is so powerful it speaks for itself.
The table below presents the results of a spelling test taken by all children at St George’s Church of England Primary School at the beginning of Y2 in September 2015. There were, at the time of the test, apart from a pupil who had joined the school in September, twenty-nine children in the class, all of whom had been taught using Sounds-Write in YR and Y1. The same twenty-nine children (100%) had also passed the Phonics Screening Check the previous summer. The class contains twenty boys and nine girls. 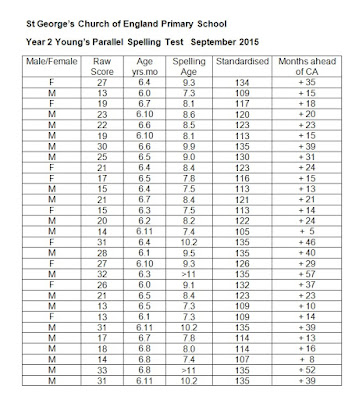 It is immediately obvious that not a single one of the children from this very poor neighbourhood scored a spelling age below their chronological age (CA). In fact, apart from two pupils who were five months and eight months ahead of their CA respectively, all the remaining 27 children were ahead by double figures – eighteen of them by more than eighteen months ahead of their CA. Two, at ages 6 years and 3 months and 6 six years and 8 months respectively, hit the ceiling (11 years) on this test.
We used Dennis Young’s Parallel Spelling Test because, as we have long argued, spelling gives a more reliable indication of a pupil’s literacy than a reading test. Firstly, as everyone knows, spelling is harder than reading because what you have in front of you gives an immediate visual prompt – recognition memory; whereas, when spelling, we have to access the sounds we hear and represent them by using our recall memory. It is also pretty obvious that if you spell a word, there is a very strong likelihood that you can read it.
The teachers at St George’s are able to achieve these fantastic results because they have been properly trained in linguistic phonics and because the leadership in the school make sure that no child is left behind and that all children are taught to read and write. Every school should aspire to that same goal.