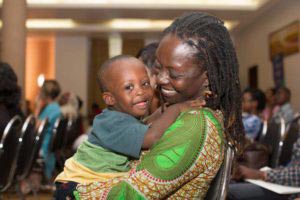 A couple of weeks ago, Debbie’s son Kofi wrote his name. Kofi and his mother Debbie had been making a shopping list when Kofi asked for a piece of paper and wrote his name. He wrote, completely unaided, without his mother having to hold his hand or to prompt him, and, said each sound as he wrote. 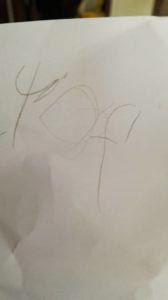 So what, you’re probably thinking? What’s the big deal? Yet this was a moment that caused Debbie, who described herself as ‘too excited to remain calm’, to rush to Mandy Budge, the head teacher at MultiKids Inclusive Academy to report the fantastic news. You see, Kofi is still only four-years-old and he was born with Downs Syndrome. He began at MultiKids when he was only six months old. In fact, Kofi is rather special in more ways than one: it is because of him that the sign outside the school which said that the school took children from three years onwards had to be changed. It was because of Kofi that they started taking much younger children!

Needless to say, quite apart from Kofi’s marvellous achievement, Debbie is really excited to see that the work the school is doing is carrying over into everyday life.

Last October, Judy Lawson and I had the privilege of training the wonderful staff at the MultiKids Inclusive Academy in Sounds-Write. The school caters for children and young adults aged between six months and twenty-one years, and was set up and run by the steely and determined head teacher, Mandy Budge.

The school is an accredited international school and is the first and only inclusive school in Ghana, West Africa. It provides an education for neuro-typical learners and also for learners who may have a specific learning challenge like dyslexia, attention deficit hyperactive disorder, Aspergers, and mild autism. In addition, the school also provides specialised learning environments for learners with Cerebral Palsy, Downs Syndrome, Autistic Spectrum Disorder, and Global Delay.

The school offers scholarships for children with special educational needs and insists on the right of these children to have an education, which, of course, is likely to have such a profound knock-on effect on their economic, social and human development. Mandy’s sterling work in this area has helped break the cycle of poverty and discrimination that so many children with disabilities face.

For Mandy and her staff no challenge is too great and I have seen the astonishing difference the school is able to make on the lives of these children. Since training in Sounds-Write, all children in the school are making huge strides in becoming literate. Accra is not a great place to grow up in if you’re a child with the kinds of special needs Mandy and her colleagues have to contend with every day.

But this is only part of the story. Since their training, the staff, with so many strong and enthusiastic personalities, is constantly receiving reports from happy and, sometimes, astonished parents about the progress their children are making.

After we trained the teachers in the school last October, Judy has since been back to give further support. The school has also benefited from the support from Phonic Books, who, along with Sounds-Write, sent a package of decodable readers, and from staff at the Open University, who contributed a wide range of narrative and informational texts for the school library.

I can’t wait to see how much more they can achieve.