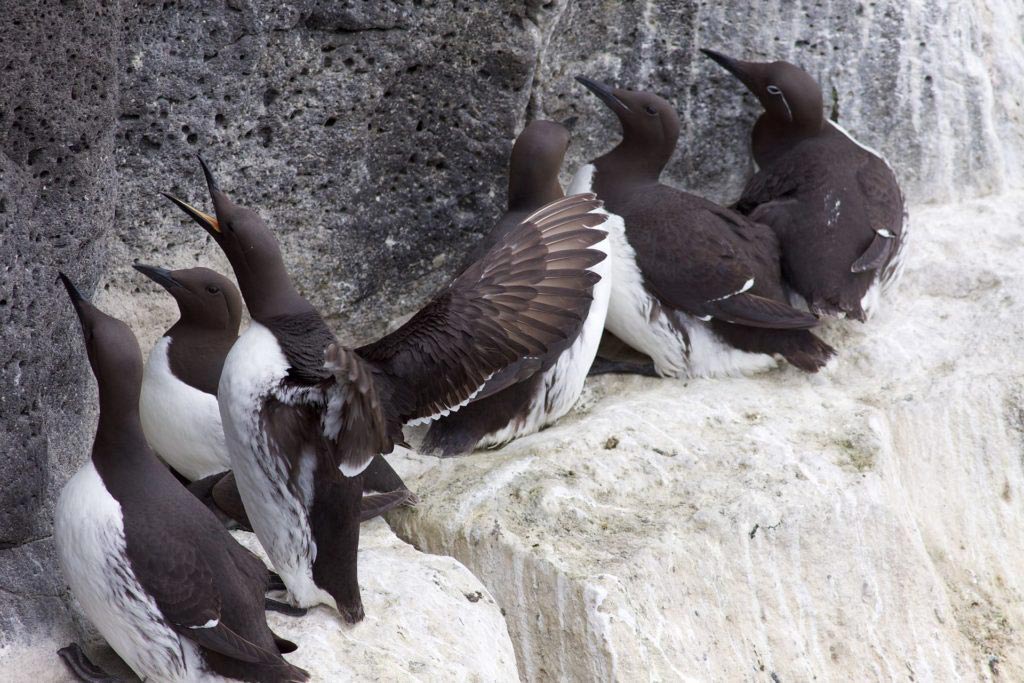 Just a few weeks ago I listened to a programme on Radio 4 in which British evolutionary biologist and ornithologist professor Tim Birkhead from the University of Sheffield talked about a mystery which has fascinated him for the past six years. The mystery? Explaining why guillemot eggs are shaped the way they are. [He’s a scientist remember.]

During the breeding season, guillemots congregate in large, dense colonies on the sides of cliffs and are forced to lay their eggs on very narrow shelves, where they then sit precariously balanced until they hatch.

A guillemot’s egg is about twice the size of a hen’s egg and it looks, as described by Birkhead, ‘a bit like an obelisk… blue, speckled and weirdly elongated at one end with almost flat sides’. The question asked by scientists for centuries is: why? 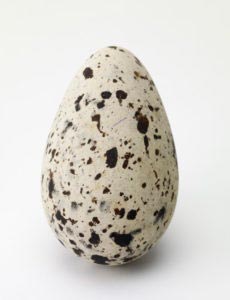 One idea proposed was that the shape of the egg would allow it to spin like a top when knocked or blown by the wind. The problem with this idea was that it was based on experiments done with blown (empty) eggs, which, of course, behave quite differently from the real things.

Next, it was suggested that the egg would move in an arc when placed on a smooth, sloping surface. In theory, this would stop the egg rolling off the cliff. The flaw in this argument was that the arc described by the rolling egg is about eighteen inches wide and guillemots nest on ledges that are more likely to be only two inches wide.

To avoid predation by gulls and ravens, guillemots nest cheek by jowl with razor bills, whose eggs are shaped much more like a hen’s egg; so, there’s a great deal of competition for space and guillemots can’t be too choosy about where they lay their eggs.

One day, Birkhead recalls that he placed a guillemot egg on a steep (30 degrees) slope. What he found was that the egg ‘stayed put’, whereas those of the razor bills’ did not. Further experimentation found that the more pointed the egg, the more stable it was on such a slope: its flat, oblong sides maintained more contact with the substrate slope. It was obvious that if you have to breed on narrow, densely populated cliff edges that are highly uneven and slope widely in many places, natural selection would favour birds which lay flat, oblong-shaped eggs.

Okay, so you’re wondering why I’m writing about guillemots in a blog that is almost always exclusively concerned with literacy. Well, the point of the story is that scientists had been trying to solve the puzzle of the guillemot egg for centuries by theorising it. They had tried some practical experiments with empty eggs, plaster eggs and, more recently, even with 3-D printed eggs but unless you’re prepared, as Birkhead observes, to ‘get your hands dirty’, you’d keep coming up with the wrong answer. In other words, there’s no substitute for field work.

I think that the teaching of literacy is a bit like that. Of course, we do need theory but if you really do want to find out whether your ideas work or not, you need to ‘get your hands dirty’ and test them against children in the classroom.

Photo of guillemots by Boaworm: https://commons.wikimedia.org/w/index.php?curid=10815239