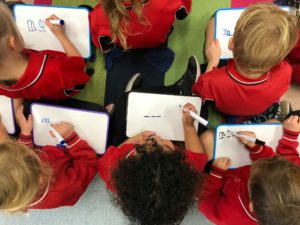 People have been asking me recently about the new Reading Framework’s guidance on teaching phonics and specifically on the use of mini-whiteboards.

The guidance states that ’… sitting on the floor and writing on a mini-whiteboard does not help children learn to hold a pencil and form letters correctly. To write, they should sit comfortably on a chair at a table. Using a whiteboard also means there is no paper record of the work, for the child, the teacher, or the parent.’

The first part of the statement is certainly true but then handwriting practice on paper using a pencil or pen wouldn’t normally be conducted at the same time as the phonics lesson – at least in Sounds-Write.

It is also true that, in the main, there will be no record of children’s work if that work is recorded solely on whiteboards, though teachers are highly resourceful and often take photos of work and compile them with other work as evidence of children’s learning. You only have to look at social media to see multiple examples of children’s writing recorded on mini-whiteboards. The truth is that there’s a time and a place for both. What matters is the purpose.

So why do we at Sounds-Write set so much store in the use of mini-whiteboards?

Writing on whiteboards enables children to start writing in the same instant they start learning to read.

Many children find wielding a board marker, which is often a bit thicker than a pencil, much easier to handle than they do a pencil and they can start copying letters from the start of their first phonics lesson. Integrating reading and writing is a powerful way of ensuring that what is being taught has a much greater chance of going into long-term memory if the two are linked from the start. Anyone learning a different alphabetic script will confirm that writing letters and linking them to the sounds they represent is the most efficient way to learn them.

Having completed writing a word, children ‘chin it’ (display it) to the teacher, who checks if it is correct – a task almost impossible to do if children are sitting writing at desks – and is able to offer immediate feedback if an error has been made. This kind of formative assessment enables teachers to spot every kind of error wherever it occurs and to provide instant corrective feedback and feedforward.

At the early stages in Reception, letters won’t be perfectly formed: the letter < t > might look more like a cross, for example. Nevertheless, as long as the letter is recognisable, it can be accepted until handwriting has been practised more extensively. If a letter is reversed, the teacher can step in quickly to model the writing and this process can be scaffolded depending on the amount of support required by each child.

People who question the use of mini-whiteboards don’t understand the profound importance of integrating writing and reading and teaching them together. They also miss the role mini-whiteboards can play in providing immediate feedback through formative assessment.