Skip to content
There are a number of reasons why I think that phonic programmes that advocate the use of flash cards are barking up the wrong tree. The use of flash cards is a legacy of old fashioned phonics programmes, which emphasise the visual/graphemic at the expense of the aural.
Presenting children with flash cards, which are by the very way in which they are presented, decontextualised, will ‘work’ only to a certain extent for some children, particularly those with some prior learning and for those with strong visual memories. For these children, some would, as the number of new words increases, reach the limits of their visual memories fairly quickly and go on to struggle; others would begin to connect spellings and sounds implicitly and go on to teach themselves to read. But for all children, I would argue, flash cards are a waste of time and even send children down the wrong path, especially when, as I believe, there’s a better way of teaching reading and spelling. 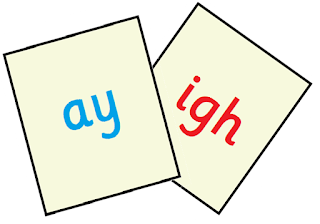 Both John Hattie and Daniel Willingham argue that learning is much more effective if it is contextualised. Not only are flash cards decontextualised in that they are not presented in the context of words, they are, and more importantly, also decontextualised in terms of how they function. In other words, they are not linked to where in relation to other sound-spelling correspondences they appear in words.
What are these dependencies?
Ø  Is the spelling comprised of more than one letter?
Ø  Are there alternative ways of spelling a particular sound?
Ø  Can a particular spelling represent more than one sound? For example, if the single letter spelling a is presented to children, it will invariably be presented as /a/. Although it is sensible to present it as /a/ to begin with, whether it is /a/ or not will be heavily dependent on what precedes and what follows it: if the spelling a is preceded by the sound /w/, spelt as w or u, the chances are it will represent the sound /o/, as is ‘swan’ or ‘squash’. In other words, context is vital.
The idea that a spelling can represent more than one sound is not best taught by rote activities such as flash cards. It is taught through a combination of carefully structured and presented activities that teach conceptual understanding of how the writing system works in relation to the sounds of the language, the precise correspondences in context (!), and the skills needed to be able to use this understanding and factual knowledge fluently. In other words, the fundamental flaw in the idea behind using flash cards is that there is no coherent, conceptual backbone to the approach.
Spellings, which are being presented on flash cards, are very often not grouped according to whether they represent single letter spellings, or two-, or three-, or four-letter spellings of sounds [sh i p, l igh t, eigh t). They aren’t grouped to be anchored in individual sounds so that it is made clear that there are different ways to spell the target sounds [sh e, s ea, m ee t, k ey, h a pp y, f ie l d]. Moreover, the fact that many spellings represent more than one sound is more often than not completely ignored [h o t, g o, d o, m o th er].
Another problem with the use of flash cards is that the approach relies heavily on paired-associate learning: associating one thing with another. Associating random isolated sounds with random isolated spellings is very hard to remember. Try it with an invented, symbolic alphabet. It is extremely difficult! And, if adults find it hard, how much harder is it for young children?
Linguistic phonics programmes, such as Sounds-Write, present a completely different alternative and one that is underpinned by a clear and coherent rationale supported by cognitive psychology. We begin with word building. Word building introduces sound-spelling correspondences in the context of whole words right from the start and it anchors them in what all children learn naturally: the sounds of their own language.
Advocates of linguistic phonics make absolutely explicit that the squiggles on the page we call spellings (comprised of letters of the alphabet) stand for the sounds in words. Even if, intellectually, young children don’t grasp this idea immediately, they begin to ‘cotton on’ very quickly as they operate the procedures of blending, segmenting and phoneme manipulation.
Our methodological approach also presents new information in small steps and from simple to gradually more complex. In other words, we build into the minds of the children a schema for sounds and spellings! It is this that helps children to remember.
Admittedly, as acknowledged by experts such as Hattie, the formation of schemata is a long process and it requires extended feedback and practice from those who know how the writing system is structured. We know that getting information into long-term memory is highly dependent on how we present the information. With adequate practice – more for some children, less for some others – it is possible to build a wholly integrated schema for all the major complexities of the alphabet code over the three years (KS1) we believe it takes to teach children to read and spell to a very high level of proficiency.

We don’t need to drill children by rote. Reinforcement comes with consistent exposure in the activities of reading and writing in context.

One thought on “Why doesn’t The Literacy Blog advocate the use of flash cards?”