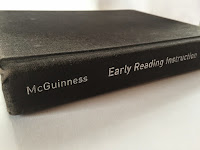 ‘Phonics,’ wrote Diane McGuinness, in her superb book Early Reading Instruction  ‘is a problematic word.’ Never was there a truer thing said! Why? Because ‘phonics’ is an umbrella term for all kinds of approaches, some good and some fair-to-middling-grim.  According to McGuinness, the ‘classification is unsatisfactory because it does not identify the critical difference in logic between programs that teach the code backwards from print to sound, and those that teach it forward from sound to print (linguistic phonics)’.
In McGuinness’s summation, the problem is deeply embedded in the orientation of the particular programme: is its orientation from print to sound, or from sound to print? In the former, the orientation is primarily visual; in the latter it is phonemic.

In this post, I want to point to a fundamental, logical inconsistency in the approaches used by many specialists in the teaching of literacy here in the United Kingdom, in Australia and in the USA. The inconsistency is this: many teach some version of ‘traditional phonics’, which is to say that their orientation is ultimately graphemic or visual.
What is meant here by ‘graphemic’ is that teaching goes from print to sound, rather than sound to print, as it does in linguistic phonics approaches. Why, you may wonder, is this an important issue? The simple answer is that, if our alphabet code were as straightforward and simple as it is with, say, languages such as Spanish or Italian, it wouldn’t be important at all.
Simple codes are relatively unambiguous: sounds are mostly represented by single-letter spellings and spellings represent one sound. So, teaching simple codes is easy and with languages like Spanish and Italian, which have such transparent codes, it matters much less if the orientation of the teaching is graphemic or phonemic. In other words, it’s hard to get the teaching wrong! However, in cases in which the code is much more complex, as is the case in English, it matters a lot!
Now, here’s the rub! Most phonic programmes start by teaching the simple one-letter spellings to one sound. This often masks whether they are truly phonic or merely graphemic because, at this early stage of teaching, it doesn’t make too much difference which way round the code is taught. The crunch comes when the complexities of the code are introduced. It is at this point that graphemic programmes suddenly become caught up in their own contradictions and have to resort to all sorts of nonsensical and, frankly, illogical explanations.
Here’s a perfect example of addled thinking. Don’t get me wrong, in almost everything I read by the man, I think Daniel Willingham is superb, but, when it comes to the teaching of phonic decoding, he is no teacher. The example is from his latest book Raising Kids Who Read. On page 10, he writes the following: ‘When gh appears at the start of a word, it’s pronounced as hard g (e.g. GHASTLY, GHOST).’ Okay, so far, so good!  But then, he writes, ‘In the middle of a word, it’s silent (e.g. DAUGHTER, TAUGHT)…’
What this tells us is that: a) that Willingham can’t segment words into sounds and then link the sounds to the spellings. [There are four sounds in ‘daughter’, /d/ /or/ (or /o/ in US English) /t/ /schwa/; and, three in ‘taught’.] b) he doesn’t ‘get’ that spellings are representations of sounds, or that spellings can be represented by one, two, three or four letters. As I’ve stated many times before on this blog, letters don’t ‘make’ or ‘say’ sounds. We do! There are no silent letters because ALL letters (I prefer ‘spellings’ a much more accurate term!) are silent. The only constant in the spelling system is the sounds.
This is extremely important precisely because as soon as the code moves from simple to more complex, unless teaching is anchored in the sounds of the language, confusion can (and does) quickly set in. For example, if the single-letter spelling < o > can be /o/ in ‘hot’, /oe/ in ‘go’, /oo/ in ‘do’ as well as /u/ in ‘mother’ and a teacher tells a young child, who is likely to take such things very literally, that the letter < o > can ‘say’/’make’/o/, but then it can also ‘make’/oe/, and /oo/ and /u/, the child is almost certainly going to wonder whether, if it can ‘say’ or ‘make’ these sounds, it can ‘say’ or ‘make’ any sound. A ‘magical’ code that appears to operate like this is not a code and is unworkable.

On the other hand, if the child is taught to understand that the sounds s/he utters in words and sentences all the time are written/spelt by the spellings we introduce from the start, the code is always anchored in the forty-four sounds in speech. It also makes perfect sense psychologically. Then, we don’t need ‘curly k’ and ‘kicking k’, ‘hard gee’ or ‘soft gee’, ‘short vowel sounds and long vowel sounds’. All of this becomes completely redundant. In fact, young, literal-minded children often have no idea what ‘hard’ and ‘soft’ sounds are. Nor indeed do they understand a lot of the completely gratuitous verbiage that goes with much of the teaching they get.

As for rules, I have never met a teacher in my life who knows what the rules are in their entirety, never mind the exceptions to the rules. In Early Reading Instruction, McGuinness explains why they are superfluous, but that’s the subject of another post.

4 thoughts on “Sound to print: the appliance of science”