Skip to content
Thanks to reminder in a tweet from Maggie Downie, I’m adding a further point to my previous post ‘Linguistic v traditional phonics’.
As I’m always arguing, linguistic phonics gives primacy to the spoken language. The reason is because all children grow up learning the spoken language naturally, which is not the case with written language!
As I argued in the other posts, teaching children that words are comprised of the sounds in their language and that every one of those sounds has been assigned a spelling at some point in the past makes perfect psychological sense: “Oh that’s what this game is all about! Why didn’t someone tell me that before?” is the response I often get when teaching older pupils for whom this is revelation.
Now, here’s a claim I want to make: linguistic phonics is perfect for teaching any variety of English, regardless of accent (!) and this is why: it all depends on one simple idea – many spellings represent more than one sound. Moreover, it’s a very easy concept to understand. Show a four-year-old child a picture of a circle and ask them what it could be. They’ll give you innumerable examples: an orange, a ball, a face, a pizza, etc, etc. If they can understand that, they can understand that the spelling [ea] can be /ee/ in ‘seat’, /ae/ in ‘great’, and /e/ in ‘bread’. 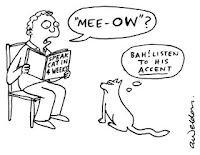 If you understand that, you can adapt your teaching of phonics to any accent of English:
If you’re teaching the word ‘bath’ in North Staffordshire, the spelling [a] represents the sound /a/ in ‘hat’. It is /a/ for the people living there and also in many other places in the UK. However, for a large number of other people who live across a great swathe of the South, the [a] represents the sound /ar/ as ‘father’.
So, it can be /a/ and it can also be /ar/. If one doesn’t work, what do you do? Try the other! As long as teaching is grounded in the forty-four sounds of the language, it’s an absolute cinch to teach: does the [a] go in the /a/ category or in the /ar/ category?
This also allows for interesting classroom discussions: the spelling [oo] can be the sound you hear in ‘could’ in words like ‘cook’ and ‘book’ in many accents; it can be the sound you hear in ‘moon’ and ‘soon’ in others.
Linguistic phonics is simple and logical because it is always anchored in the forty-four or so sounds in the language, whether you come from Manchester in England, Glasgow in Scotland, Austin in Texas, USA, or Perth in Western Australia, teachers can adapt their phonics instruction to the accents of the children they are teaching.

With 359 million native speakers in the world, why isn’t everyone teaching linguistic phonics? You know it makes sense!

Thanks to Andrew Weldon for the cartoon image: http://andrewweldon.com/