Skip to content
As it’s half-term, I thought I’d draw readers attention to a couple of items you might have missed.
First up, the Oxford University Press have just published the Oxford Roald Dahl Dictionary. It’s been produced by Susan Rennie, a lecturer in English and Scots 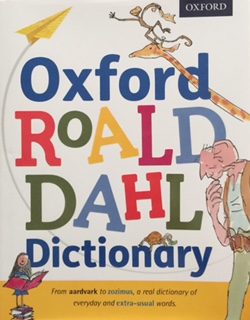 language at the University of Glasgow, where she works on a wide and very interesting range of projects, which include a Scot’s Thesaurus and work on the newly re-discovered Boswell’s Dictionary of the Scots Language. You can read more about her work here and here.

The Dahl dictionary is a cornucopia of rich vocabulary, both real and made up by Dahl. Just about any word you can think of that has turned up in one of the Dahl books is contained in this dictionary, along with the sentence, a definition and the book in which it appeared.
And, for those of you who are sick and fed up with people trying to foist on you heaps of ‘alien’ words, look no further than the almost endless variety produced by Dahl’s inventive mind. Whether you’re a muggle-wump who likes mudburgers, a maidmashing meatdripper partial to mouldy muckleberries, or a nincompoop after a nishnobbler, you will be sure to tickle the interests of children and provide yourself with an endless array of grist to your phonics mill.
And, talking of strange words, you might be interested in the Scripps National Spelling Bee, which for third time in succession has resulted in a tie.

Reported on by USA Today, the winners this year were Nihar Jangar from Texas and Jairam Hathwar from New York. From an entry list of 285 competitors, the two contestants had fought their way through thirty-nine rounds of the competition to share the trophy and prize money of $45,000 in cash. Their winning words were: ‘feldenkrais’, which is apparently a somatic educational system designed by Moshé Feldenkrais; and, ‘gesellschaft’, which is German for ‘community and society’.

These days competitors are so well rehearsed in spelling words with Greek and Latin roots that the organisers of the event have introduced more obscure words that are less well embedded in English, such as Afrikaans, Irish Gaelic, Danish and even Mayan.

Believe it or not, Jairam’s favourite way of relaxing is to play golf with his dad. Both boys, whose parents are recent migrants from southern India, continue an astonishing run of success by Indian American entrants and both are aiming to become doctors.
If you have time to read more about the Spelling Bee, I’ve posted a number of pieces about it in the past, which you can select from here.