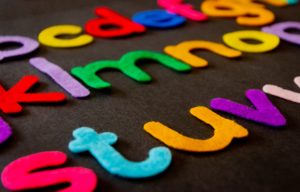 Until young children (Reception/Y1) are secure with sounds – i.e, they understand that letters are representations of sounds in words – they should not be introduced to letter names. Teaching letter names (as well as sounds) to young children is bound to cause many children confusion and it increases the amount of cognitive load imposed on the child. The child is learning how to segment and blend, they are learning the code and the direction of the code from speech sounds to their individual spellings, and, as well as all of that, they also have to cope with the medium in which reading lessons are presented (extraneous cognitive load). Adding something that is as inessential as teaching them letter names at this point is completely unnecessary.

What’s more, children taught letter names are caught between two different orientations. If they are, as some are, beguiled by letter names, trying in vain to read and spell words using them, the confusion very often lasts well into secondary school. Key Stages 2, 3 and 4 abound with students who can’t read and write properly and are thoroughly mixed up about how the writing system works.

But, understand that teaching letter names from the start isn’t the same thing as talking about sound symbols collectively as ‘letters’! So, for example, a teacher might teach the two-letter spelling < ss > and say, “This,” pointing to the < ss >, “is two letters but it’s one sound. It’s /s/. Say /s/ here.” Why is this different from telling the pupil that the spelling is ‘double ess’? For three very good reasons: first, the alphabet code is a code for the sounds in our speech and the two-letter spelling < ss > in the example represents the sound /s/; second, because we want to orient pupils in the direction of understanding how the code works: we can spell sounds with one, two, three or four letters; and third because we want children to understand the direction of the code: from each sound in speech to its spelling.

If the pupil is writing, the teacher should be encouraging pupils to think about how to spell sounds in words as they write. A high-quality phonics programme will be doing this from the start. Inevitably, pupils will come to areas of complexity that, as yet, exceed their competence. Again, when the pupil says they cannot spell a particular word, there is a judgement call. If the child is still in the early stages of learning the code and they want to write a relatively complex word like ‘delicious’, clearly there too many different complexities to make sense to a child. In this instance, the teacher can and should supply the word. However, if the difficulty is with a word, such as ‘bright’, for example, the teacher should be asking the pupil what the difficult bit in the word is for them. As before, if a pupil is working with one-to-ones and can segment and blend, the bit beyond their present knowledge will be the spelling of /ie/. In this case, the teacher writes the spelling < igh > on a whiteboard and says, “This is how we spell /ie/ in ‘bright’”. Again, what could be easier?

When pupils reach the stage of learning that sounds can be spelt in more than one way and that most spellings can represent more than one sound, the formulation changes. By now, the pupils should understand the nature of the alphabetic code: i.e, that letters, singly or in combination, represent sounds in our language. This is when the teacher no longer has to write the spelling on a whiteboard but can simply respond to the question ‘How do I spell the /ie/ in ‘bright’?” with “It’s the i g h (said as letter names) spelling”.

This technique works perfectly well for learners of any age. At age five, the teacher may well need to write the required spelling on a whiteboard; at age nine, when the word is ‘archaeology’ and the pupils are learning about the Egyptians, the teacher can give the required spelling as letter names: ‘We spell the sound /ee/ in this word ‘ay’ ‘ee’ .”

Once pupils understand how the code works, letter names then become a useful adjunct to our teaching – in effect, a shortcut. Instead of having to write on a whiteboard or in a book, we can give the letter names. If children are taught how to read and spell in a systematic, highly structured way by people who understand the right combination of skills, concepts and code knowledge needed to learn such a complex body of knowledge, they are likely to be able to impart the requisite knowledge at the appropriate moment.

Photo by Magda Ehlers from Pexels

2 thoughts on “Sounds or letter names? An update”