Skip to content
In case you missed the announcement last week, ‘selfie’ is the Oxford Dictionaries‘ new WOTY (word of the year). Apparently, given its ubiquity, the decision was almost unanimous. Since its rise in popularity, it has also spawned a host of bizarre derivatives: ‘helfie’, ‘belfie’, ‘welfie’, as well as ‘legsie’! Last year Oxford Dictionaries went for ‘omnishambles’, though ‘pleb’, ‘chick lit’ and ‘mummy porn’, courtesy of Fifty Shades, were also in the running.
Last year’s in-word for the American Dialect Society was ‘hashtag’. In 2011, it was the eminently forgettable ‘occupy’ and, amazingly, because it seems as if it’s been with us forever, the year before that it was ‘app’. Something tells me that, until the technology is superseded, ‘hashtag’ and ‘app’ are going to be around for some time.
The American Dialect Society doesn’t choose its WOTY until January so we’re going to have to wait and see what emerges as the winner in the US. At the moment there are a number of contenders. According to the always likeable lexicographer and linguist Ben Zimmer, ‘twerking’ is a strong runner. 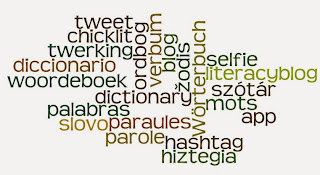 I quite like ‘derping’. It’s a Paul Krugman invention for people who ‘take a position and refuse to alter it no matter how strongly the evidence refutes it, [and] who continue to insist that they have The Truth despite being wrong again and again’. Krugman is an economist and professor at Princeton University in the US so I suspect only economic nerds and political geeks will have heard of the word.

Anyway, for all of you lovers of the language out there, Zimmer’s Visual Thesaurus is a cornucopia of delights.