Skip to content
I’ve just been asked by someone in Australia why it is that the Sounds-Write programme aims to teach to young children multiple spellings of a sound at the same time – the concern being about overloading children’s memories.
This is unquestionably the hardest aspect of learning how to read and spell for every single one of us. Why? Because there are so many different ways of spelling the 44 or so sounds in English. Even a person who regards him/herself as an almost perfect speller will admit that reading and spelling words they have never seen before and that contain less frequently encountered spellings is very troublesome. For example, could you read accurately or spell the word ‘laodicean’, /l/ /ae/ | /oe/ | /d/ /i/ | /s/ /ee/ | /schwa/ /n/, not having seen it before? I chose this seemingly random word because someone actually did! It happened in 2009, when Kavya Shivashankar from Kansas triumphed over 292 other entrants to win that year’s Scripps Spelling Bee by spelling the word correctly.
So, why do we believe it necessary to introduce more than one spelling of a sound as soon as we have taught the basics. There is good reason for this. If a teacher teaches one spelling for a sound and three months later teaches another spelling for the same sound, followed, say, a few months later by another spelling of the sound, the connection between the sound and the spellings is lost! Furthermore, taught in such a piecemeal way, young children are likely to form the impression that there are endless spellings of a sound and that, therefore, there is no point in trying to learn them. In other words, such an approach is demotivating.
By the time they arrive in school, children have already acquired the sounds of their own language. This is our starting point and the anchor for our teaching of the code. If you tell the pupil that this [ ay ] spelling is the way we spell the sound /ae/ in ‘play’ but that there are other ways of spelling the sound and these others are introduced and are taught in the context of whole words, the idea isn’t difficult to grasp. From a conceptual point of view, children are easily able to identify different types of car or flower but still know perfectly well that they all fall under the superordinates of ‘car’ or ‘flower’. 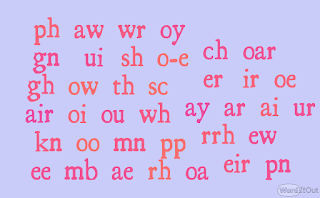 The anxiety some teachers have when we tell them that we teach four spellings of a sound to begin with is that we expect the child to remember them and be able to use them in their writing immediately. We don’t! This isn’t at all the case. For pupils to be able to use the spellings of sounds correctly in words, they still need to have lots of exposure from reading. For this, they need to be trained to notice which particular spellings are being used in the words they read, which they get from having lots of deliberate practice. By helping them to internalise the key points of learning, what we are doing is creating mental representations of the spellings of sounds in words.
To strengthen this, we make sure that pupils spend two weeks focusing on and practising, through a variety of activities, the spellings of target sounds in the context of words, sentences and texts. This gives them time to transfer the new knowledge into long term memory and to further build the schema for sounds and spellings we have helped them develop from the beginning of the programme.
After a sound and a limited number of spellings have been covered in the two-week period, they are recycled over the next two weeks when we introduce another sound and its spellings. The process is further reinforced a short time later, this time in the context of teaching polysyllabic words.
So, back to my Australian correspondent: after such rigorous exposure to the common spellings for each sound, taught over two years, we find that almost all children are able to cope very easily with multiple spellings of a sound for both reading and spelling. Many of them are also able to spell words like ‘laodicean‘ because they’ve learned to focus on the spelling they’d find most difficult if they were writing the word.